Reach Out Mission - "To serve humanity, is to give time, treasure and talent" 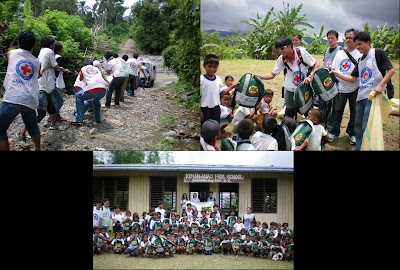 "To serve humanity, is to give time, treasure and talent"

Around 20 people joined the reached out mission to give school supplies and conduct earthquake drill in Kiman-aw Primary School and Silapawan Primary School at Silapawan, Paquibato District, Davao City.

The 20 people were volunteers from the two organizations, the Philippine National Red Cross- Davao City Chapter and NCCC cares, a foundation of the New Center Commercial Center. Both organizations were headed by the Engr. Edwin Patalagsa, Chapter Service Representative of Disaster Management Service of PNRC-Davao City.

It took three hours and crossing ten rivers just to arrive in the place. Angel May Cabaylo, Red Cross youth volunteer said, "I was so afraid since the road was so stiff." It was even more fearful since the truck wasn’t able to move forward while crossing the 9th river. The volunteers were stranded for almost two hours and through their "bayanihan spirit" of the volunteers and help of some residents the problem was finally solve.

The group arrived at lunchtime; the volunteers were group into two since we will be visiting two schools. I was with the team of Kiman-aw where school children were excited to see the group since they have been waiting for four hours. They welcome the team by singing their native song to their visitors. To some volunteers the experience was priceless.

Ms. Cabaylo added "I would never exchange the happiness I saw where the kids jumping for joy and saw their happy faces while receiving their new bags and notebooks".

The school has a total of 75 pupils ranging from Grade I to IV levels. Most of them were from Ata-Manobo tribe. The teachers were Mr. Mario C. Fernandez and his co-teacher Mrs. Arlene H. Abapo. They were diligent and patience even as it means going away from their homes and families. They deserve to be called us heroes, said one of the pupils.

Although it was plan that there will be an earthquake drill. It was cancelled the reason: it was raining.
Posted by Neighbors Helping Neighbors at 4:04 AM