"WASHINGTON - The Bush administration intends to slash counterterrorism funding for police, firefighters and rescue departments across the country by more than half next year, according to budget documents obtained by The Associated Press. ... Some grants criticized as wasteful".

Both sides of this debate are included in the complete article which can be found at: http://www.msnbc.msn.com/id/22046131/
Posted by Neighbors Helping Neighbors at 4:14 PM No comments:

In The Event Of An Emergency - Emergency Alert Systems

Do you know about XM Channel 214 - Washington? The XM Weather and Traffic Station for the Washington DC area.

Through an agreement between XM and several local counties, Emergency Alerts will also be broadcast on this channel.

XM Channel 247 is also worth checking out as well, as a way to find out about larger scale emergencies and emergency messages from across the country. Additional information on that channel can be found here: http://www.xmradio.com/onxm/channelpage.xmc?ch=247

Did you ever wonder what other jurisdictions across the United States are doing? Check out this website: http://www.cybertelecom.org/security/eas.htm

Posted by Neighbors Helping Neighbors at 12:25 PM No comments:

Fairfax County - Best Practices In Your Own Backyard - A Look Back

Posted by Neighbors Helping Neighbors at 10:47 AM No comments:

Congratulations to Andrew Levy, 2007 Citizen Corps Leader of the Year as presented at the 2007 Virginia Public Safety Outreach Conference. 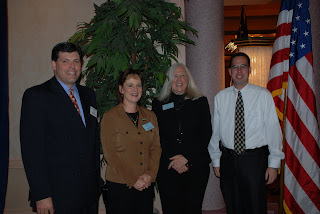 Pictured (from left to right) are:

Best practices learned from other Citizen Corps Councils will be shared in the next few weeks on this blog.

Posted by Neighbors Helping Neighbors at 4:40 AM No comments:

School emergency preparedness resources
U.S. Education Secretary Margaret Spellings, Homeland Security Secretary Michael Chertoff and Commerce Secretary Carlos M. Gutierrez released a set of guidelines to help educators and parents interpret federal privacy laws in an initiative prompted by the mass shooting at Virginia Tech. The Department of Education also released three brochures on privacy laws: one for K-12 educators, one for colleges and one for parents. They will be sent to schools, school boards and education associations.
A press conference for the initiative "Creating a Culture of Preparedness Among Schools" took place at Mt. Vernon High School in Alexandria, Va., with student representatives from the Fairfax County Fire and Emergency Medical Services Science program and the Fairfax County Citizen Corps Council.
A complete DHS list of emergency preparedness resources for schools is available at http://www.dhs.gov/schoolpreparedness.
Posted by Neighbors Helping Neighbors at 6:49 AM No comments:

Congratulations to Gerry Connolly for being re-elected as Chairman of the Fairfax County Board of Supervisors. We look forward to your continued support and help to secure funding to maintain our programs.

Gerry Connolly knows that the first step in fighting crime is to prevent it. Last year, the crime rate in Fairfax County hit a 32-year low and, among the 50 largest jurisdictions, was the lowest in the nation. Our violent crime rate is half that of our neighboring jurisdictions.

- Put more police officers on the street and a police resource officer at every school
- Fought gangs by involving police, schools and the community in an anti-gang initiative that has reduced gang membership by half in our schools
- Initiated the Park Watch program
- Started the Safe Teen Driving initiative
- Strengthened Neighborhood Watch and Citizen Corps programs
- Chairs the Emergency Preparedness Committee for metropolitan Washington

Posted by Neighbors Helping Neighbors at 5:08 AM No comments:

Have you seen a conference you would like to attend, but it is too costly?

You might consider volunteering at the conference. Often they offer their volunteers free registration and it also provides a good networking opportunity.
Posted by Neighbors Helping Neighbors at 4:25 AM No comments:

While we focused on free training this week, we should not forget about training programs at relatively low cost through local community colleges.

Explore a Second Career at NOVA’s
Medical Education Campus in Springfield
NOVA’s Springfield-based Medical Education Campus (MEC) is adding three newly formatted courses to its winter schedule: Medical Office Specialist, Medical Transcription, and Comprehensive Medical Billing and Coding. According to Harriet Zimmerman, RN, Director of Workforce Development and Continuing Education, the classes represent a “track” for students planning to work in the medical field but not directly with patients.

"We’re using several of our most popular courses to construct a Medical Office track that can be taken separately or in succession,” Zimmerman explains. “This series may be of particular interest to career-switchers—it allows successful students to enter a job field where there is high demand for these skills.”

The five-week Medical Office Specialist training program provides the knowledge and skills necessary to function as an administrative professional in a medical office. Students will learn how to effectively run the MediSoft office suite (used in a majority of medical offices in the D.C. metro area); following successful completion of the course, students can seek employment continue their education.

Comprehensive Medical Billing and Coding is a 12-week course that allows students to apply theoretical and practical billing and coding knowledge to real-life situations. (This class is also offered at NOVA’s Arlington Center, located near the Ballston subway station.)

Basic Medical Transcription is designed specifically for those looking for a second career; graduates are well-prepared to work in a doctor's office, hospital, clinic, or to be self-employed. The six-week course includes medical terminology, anatomy, physiology, completion of medical reports and medical digital editing.

The winter session of Workforce Development and Continuing Education classes gets underway mid-January. To register or to learn more about these classes, call 703-822-6532 or visit http://www.nvcc.edu/medical/continuing
Posted by Neighbors Helping Neighbors at 1:49 PM No comments:

For those who have been waiting for our website to be updated, it is now complete. 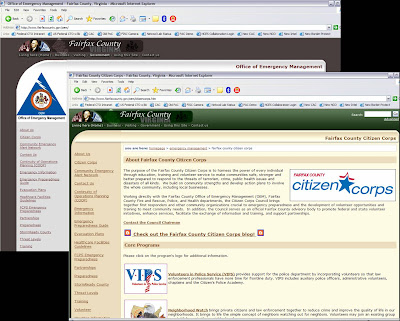 Thank you to Ellen Kamilakis for making this happen.
Posted by Neighbors Helping Neighbors at 11:15 AM No comments:

What about the Red Cross?

Do you think of the Red Cross only for CPR and First Aid training?

They offer a wide variety of Disaster Related training at no charge. Information can be found at

In the near future, this blog will focus on some of the other disaster related services offered by the Red Cross, a Citizen Corps Council affiliate.
Posted by Neighbors Helping Neighbors at 11:12 AM No comments:

What about free training for your family?

You spent the time going through training yourself, but what about some
training and awareness for your friends/family.

http://www.fema.gov/about/training/individuals.shtm
Posted by Neighbors Helping Neighbors at 11:33 PM No comments:

The 4-hour course was developed with funding from the Department of Homeland Security and is offered at no charge.

Thank you to Terry Akins for passing on this information.
Posted by Neighbors Helping Neighbors at 4:26 AM No comments:

A Long Way To A Thank You

The question came up this week, is it Citizen Corps or Citizens Corps? In response to that question, the comment was made, "We represent all citizens, not just one".

From the printed material, it becomes clear that the answer is Citizen Corps, just look at http://www.citizencorps.com/

If we look at remarks from President Bush, in a press release from the Office of the Press Secretary, we do see "Remarks by the President on Citizens Corps". Are we saying that someone in the President's office made a mistake? No!

But does it matter? If we look at Citizen Corps, we are individuals who are a part of a group or team, such as a Neighborhood Watch Team, Community Emergency Response Team (CERT), Medical Reserve Corps (MRC) Team.

People often get bogged down in administrative activities and forget the core values of an organization - an organization based on individual volunteers who make up the Citizen Corps. While this might seem like an off the wall discussion, try having it and see what discussion comes out of it.

In Fairfax County, this was a very successful America's Safe Schools Week. We would like to thank each individual "citizen" - students, teachers, administrators, instructors, volunteers who are part of our "corps" - team and helping keep our schools safe.
Posted by Neighbors Helping Neighbors at 2:35 AM No comments:

Posted by Neighbors Helping Neighbors at 1:01 AM No comments:

The following picture of Fire and Emergency Sciences students was taken during a Virginia Task Force One, International Urban Search and Rescue team exercise in Lorton, Virginia.

See http://www.vatf1.org/ for additional information on Task Force One. More recently, several students from this program also participated in an exercise, which included multiple CERT teams across the National Capital Region.

Fairfax County is proud to offer these and other programs and outreach open to all students in the region.

To those that coordinate the Fire and Emergency Medical Sciences, Law Enforcement Explorers, Boy Scout Emergency Preparedness programs, and other programs and outreach, we thank you.

For additional information, or to have someone speak to you or your organization, on any of our student programs, please do not hesitate to contact us.


Posted by Neighbors Helping Neighbors at 12:35 AM No comments:

The following link includes interviews with the students that were present at the cabinet level briefing earlier this week.

It was distributed by Medill.

While Lauren Kovacic, our Citizen Corps Council student representative, was not speaking in the video, we did want to highlight an article about her from last year: