Crowds at Capital Home Show Prepared for Next Disaster

How can you get people to come over to your booth, when the focus was not on selling home products? Take the child of one of the volunteer instructors, have her lay down on the ground (on the show floor), put on some fake blood and ... 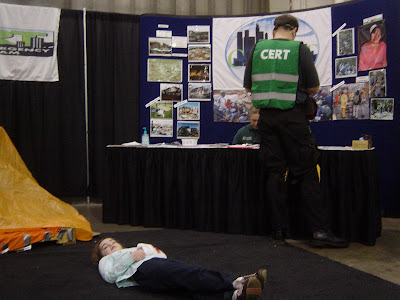 ... and see the crowds form (both adults and children look on), as CERT rescues her in a demonstration. 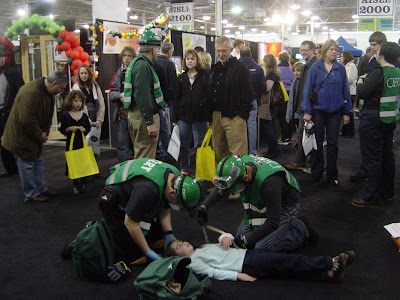 Posted by Neighbors Helping Neighbors at 1:28 PM No comments:

Are you looking for a course that will train you to teach CERT?

"This course is designed to prepare participants to institute a CERT program in their communities. Organizational topics to be briefly reviewed include: program planning, funding sources, recruiting, training, supervision, team member retention and legal concerns. Topics to be covered from the CERT course will include: disaster preparedness, fire suppression, first aid, light search and rescue, disaster psychology, teaching the adult learner and terrorism awareness. There will be a variety of hands-on practical exercises for certain topics."

Additional information, and signup instructions can be found at:
http://www.vaemergency.com/train/calendar_course.cfm?id=23
Posted by Neighbors Helping Neighbors at 1:43 PM No comments:

They expect to see around 35,000 people during the event, as well as media overage. "CERT skill demonstrations every two hours."

What a great opportunity for community outreach? But where are the volunteers?

The only problem is the day before the event ONLY 4 people volunteered for this exhibit. MANY more people are needed to help make this a success.

To sign up, additional information is available on the Fairfax County CERT Blog.
Posted by Neighbors Helping Neighbors at 7:12 AM 1 comment:

Working with Local Jurisdictions as Partners in Preparedness

Fairfax, VA, 10 Feb 2010 – The American Red Cross in the National Capital Region continues to provide disaster (volunteer) workers to support emergency operations throughout the area. Following the issuance of a blizzard warning by the National Weather Service, the Red Cross is working with local government agencies to urge residents to minimize travel and take safety precautions.

The Red Cross is following instructions to remain off the roads; disaster (volunteer) workers continue to staff shelters..." throughout the region. 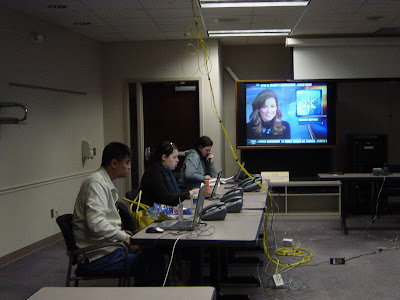 Members of the Fairfax County Citizen Corps Council and Volunteer Fairfax's Volunteers for Change volunteered, along side employees from the Fairfax County Office of Public Affairs, at the County Government Emergency Hotline to help setup and answer calls after the recent storm.

Other Citizen Corps volunteers, responded to a county request to provide 4x4 vehicle transport for those that were unable to drive due to the current road conditions. Those that were brought to the warming shelters were very appreciative.
Posted by Neighbors Helping Neighbors at 4:18 AM 1 comment:

"Creating an open, transparent, more efficient and effective government is one of our top priorities at the Department of Homeland Security," said Secretary Napolitano. "This new online tool allows the public to play a major part in our Department-wide efforts to enhance openness and accessibility."

The new online tool—available from Feb.6-March 19 at https://www.dhs.gov/open allows members of the public and interested stakeholders to submit ideas and suggestions on ways DHS can enhance transparency, participation, collaboration and innovation—while saving taxpayer money.

The ideas submitted will help guide the development of an official DHS Open Government plan.

On Dec. 8, 2009, President Obama issued the Open Government Directive to begin breaking down long-standing barriers between the federal government and the people it serves, and instructed agencies to take immediate, specific steps to open their doors and data to the American people. Agencies across the federal government will begin engaging the public through similar online tools this week.

CERT Volunteer Snowed in During the Recent Blizzard?

Are you a CERT volunteer snowed in during the recent blizzard? Then we know you have an emergency preparedness kit (complete with food, flashlights, batteries, water, etc.) So you are prepared!

There are still a few things you can do:

- Check on your neighbors.

- Shovel out a fire hydrant.

Also, do you know what number to call, if you lose power and need someone to come evacuate you to a shelter? Chances are that someone will come and just pick you up are probably a little unlikely.

A good number to have on hand is your local county emergency hotline/information number.
Posted by Neighbors Helping Neighbors at 12:17 PM 1 comment:

Citizen Corps Volunteers Needed To Help Those Without Power

Local Citizen Corps Council receives request from Office of Emergency Management (OEM) to gather a list of volunteers with 4x4 vehicles that are able to transport individuals that are without power. They would like to make a list of available volunteers with their contact information including name, address, and phone.

This effort is being coordinated by the local volunteer coordination center, Volunteer Fairfax.

Those in the Fairfax County area of Virginia, should email mferreira@volunteerfairfax.org.
Posted by Neighbors Helping Neighbors at 12:04 PM No comments: