There are many Americans who travel domestically and internationally, both on business and vacation.

But why is "Ready Travel" important?

For example, if there is a conference in Washington DC and people attend from California, will they get an emergency alert if the city needs to evacuate, should I shelter in place, etc.?

In addition, many of the alerting systems in the United States require people to register. If I live in Virginia, but work in DC occasionally or attend a conference there, should I and do I register for both systems? What if I also sometimes go to a college or school campus, as they often have different alert systems? This brings up another issue about location based alerting systems.

Last month, when I was speaking at the World Conference on Disaster Management in Toronto, it was raining pretty hard outside. After I spoke, I was talking to the people from a local emergency management group about how I received an alert back in Fairfax, VA, but if there was an alert in Toronto, I would not know. Would you believe, there was a similar alert going on in Toronto at the same time? Most people at the conference had no idea. I decided to ask the hotel if there were any alerts and they said they were not aware of any.

As you are aware, I maintain a blog "Neighbors Helping Neighbors"
(http://citizencorps.blogspot.com/). Through the website, we share best practices and lessons learned both within the United States and internationally. It is clear there are many documents and resources available in the United States.

You may also want to take a look at these resources out of the United Kingdom. http://www.fco.gov.uk/en/travelling-and-living-overseas/publications 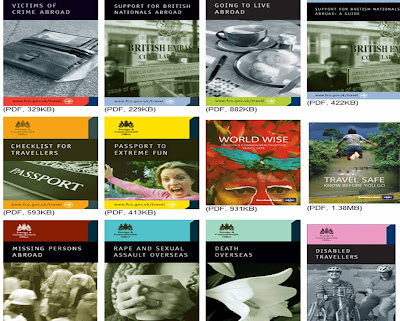 PS. Hi Erin :-)
Posted by Neighbors Helping Neighbors at 5:24 AM