Members of the Fairfax County Citizen Corps Council participated in a press conference on "Creating a Culture of Preparedness Among Schools" at Mt. Vernon High School. 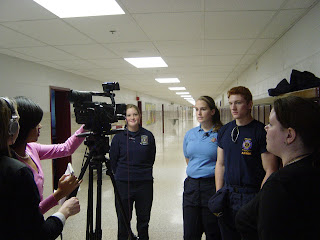 When the students greeted Secretary Gutierrez, they were presented a coin from the Department of Commerce.

During the press conference, Secretary Chertoff gave a commendation to the Citizen Corps Council for all its efforts.

A copy of the DHS press release, which references Citizen Corps Council, can be found at: http://www.dhs.gov/xnews/releases/pr_1193754645157.shtm

The Washington Post article can be found at: http://www.washingtonpost.com/wp-dyn/content/article/2007/10/30/AR2007103000849.html?hpid=moreheadlines
Posted by Neighbors Helping Neighbors at 10:19 AM