Sharing the Message with Your Family

In a disaster, you might know what to do, but does your family?


The Earth Is Shaking But These Students Know What To Do

Earlier in the week, when participating at a big school for a fire drill, the students evacuated very quickly. The pace of evacuation needs to such that no one gets hurt.

At an earthquake drill yesterday (the second one we participated in yesterday), the principal hit the hammer against the flagpole and the students quietly and orderly went to their assigned locations. They also buddy up and everyone was accounted for. The victims/actors were also evacuated and treated. 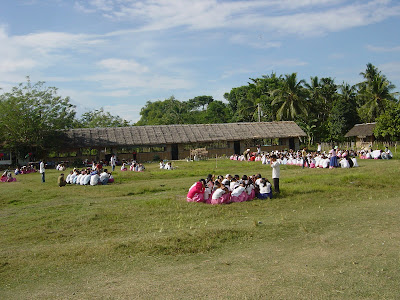 As part of the demobilization and debrief, I had the opportunity to address the participants, teachers, school administrators and local officials. I stressed the importance of awareness and preparedness not only at the school, but school is also only so many hours per day and the message also needs to be shared/passed on to the student's families.

The principal commented they plan to conduct exercises, "once a week so they can bring this home to their neighborhoods and families".

Also addressing the audience we a council representative who commented, "... in the near future, we will have our force multiplies, so later in life they can also use this so they can save lives, especially their neighbors."