As many Neighbors Helping Neighbors readers know, we are a strong supporter of including youth in our programs.

As part of National Preparedness Month 2008, we are pleased to add Michael Esguerra as a member of Neighbors Helping Neighbors Leadership Team. Michael will be sharing best practices from our next generation of leaders, serving as an International Youth Representative.

While visiting the Philippines, we had the opportunity to work with Michael through the Philippines National Red Cross, University of Mindanao, and the Kadayawan festival.

The following is an article that appeared in Sunstar newspaper.


PORTRAIT OF A YOUTH AS A LEADER
By Henrylito D. Tacio 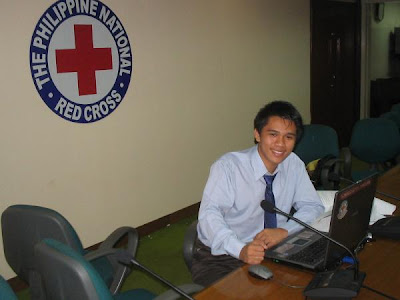 IF you're a student and Michael M. Esguerra doesn't ring a bell to you, then you are not doing your homework lately. This 18-year-old Dabawenyo is the country's vice president of the Red Cross -National Youth Council.

During the national congress held in San Fernando, La Union last year (which he attended as one of the eight delegates from Davao City), Mike – as he is fondly called by his friends and colleagues – was chosen as the second most important position during a contested election.

"I did not expect to be the vice president," he says. "It was really hard to get a national position because there were three of us from Mindanao who were vying: one from General Santos, another from Cotabato and myself from Davao."

During the election, the body has to select first area coordinators before they are nominated for a national position in the youth council. "It's like in the Congress," Mike explains. "We have to run first as representatives of our districts. Once elected, he can now join the House of Congress, were the house speaker and other positions will be elected among members."

Mike won as coordinator of Area 9, which is composed of 10 city chapters in Mindanao. "First I was shocked when I emerged the winner," he admits. "It was like I was riding a roller coaster. I couldn't explain my feeling at that time." (His term will end by 2009.)

Just like the character Peter Parker of Spiderman distinction, with great power comes responsibility. And Mike is very aware of that. "I know I will have a lot of sacrifices to do because I am no longer an ordinary youth volunteer. I am leader and I have a great responsibility with my fellow youths."

As vice president, he has the responsibility to coordinate all chapter youth councils under his jurisdiction, mostly in Mindanao. "We have done many things already like intensifying all of the Red Cross Youth programs. I am also the chairman of the HIV/AIDS and Drug Abuse Prevention Education program and we have conducted symposia and seminars on these youth problems. We are also involved in several projects like recruiting young blood donors. Last October, we were awarded as one of the ten most outstanding Red Cross youth councils in the Philippines."

Another responsibility as vice president: He has to attend national meetings of the council. Only 18, Mike has the pleasure of going to other parts of the country. He considers Subic (in Zambales) and Baguio as the most memorable places he has visited. "Subic was really beautiful. The place was also peaceful and the people were well-disciplined. In Baguio, foods were affordable and you can buy well-made handicrafts."

He also could not forget the Enchanted Kingdom in Laguna. "I felt I was a kid all over again," he says. "It was a super fun experience."

In all his travels, though, he is very proud to be someone from Davao. "I don't only bring the name of Davao but also the voice of our youths here," he says. "I want them to know that even if we are from the southern part of the country, we have lots of potentials here."

Being a youth leader, Mike urges: "I think today's youths should be more creative and get involved in what is happening to our country. They have to make wise decisions and be pro-active because they are the people that will shape this country in the future."

How he was involved as a youth volunteer in Red Cross was an interesting story. "I am now in my fifth year serving this organization," he says. "I started when I was in high-school but I never thought of becoming a member of the Red Cross. However, I didn't want to join the Citizen Army Training and there was no other option but to sign up with the Red Cross. I was elected as public relation officer when I was in my second year until I graduated from Daniel R. Aguinaldo National High-School in Matina."

When Mike entered college at the University of Mindanao, a former president of the Davao City chapter of Red Cross Youth asked him if he wanted to serve the UM-council. "I was elected as the president of the UM council when I was in second year college," he says. And it was this time that "I realized and was inspired to serve this great organization for my fellow youths. I am aware that I have lots of shortcomings as a leader but the good thing is we are helping others and we have inspired other youths to help. Achievements like that are priceless."

As if those activities with the Red Cross are not enough, Mike is also the president of the Young Marketers Society of UM's Business Administration department. Although he is still a third (year) student and only 18 years old, he was elected as the leader of the society. "I always believe that age doesn't matter," he says. "I think being young is an advantage, since we are more dynamic, more active, and more creative and we know the taste of other people, especially the youths."

The (YMS or my group ) society has done several programs and projects for its members. "We conducted various seminars to equip our knowledge in marketing," he says. Early this year, the society held the "Marketing Week 2008"— with the theme "4P's –Passion, Patience, Perseverance, and Progression" – at the UM Quadrangle Area, Bolton Street, Davao City. "The event was totally engaging and a fruitful experience for all of us."

Mike is also the auditor of the Davao City Junior Marketing Association and chairman of the ways and mean committee of the working youth center program of the Department of Labor and Employment (DOLE).

Although he is still a student, he is also working as field reporter and news writer of DXUM's 'Radio Ukay' program. In fact, he is a member of Kapisanan ng mga Brodkaster ng Pilipinas until 2010. He also writes for a local daily.

Mike is the eldest of three children of Daniel and Annabelle Esguerra. Although he was born in Bacoor, Cavite, he grew up in Davao where his parents are now engaged in a small business retailing aquarium fishes.

His final words on today's youth: "I think those young people are the most vulnerable. They are vulnerable to several temptations. They are also influenced by other bad elements of our society."

Michael can be reached at juno62089@yahoo.com
Posted by Neighbors Helping Neighbors at 8:16 AM

Mike is a role model for ALL volunteers around the world! At the young age of 18, Mike has accomplished so much and he seems to have a true understanding of what it means to volunteer. We can all learn from him. I look forward to his next article!

I read the article and was blown away by everything you do.

If your past is a mark of your future, you will do it all and you show that people can do all these things and not just one position.

Thank for your all of the stories on the blog. I love reading the stories you share and look forward to the newly added additions from the students. They are the honest truth and no one can argue one word.

I have not seen any messages to the public from the local Citizen Corps and residents need to go to the county webpage to see any messages. And those are messages from Ready.gov There is nothing right in our face. You do that. You give me an avenue to share stories with my family, friends and neighbors.

We miss you at the council. You were our biggest supporter. I will not suffer because I will still continue listening here.

Thank you for all you have done and for continuing the message of the people for the people by the people.