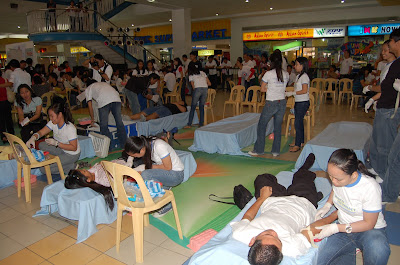 The youth today may have the great contribution to change its nation but they may have also big role on saving lives. Young people may get involved on the drive on voluntarily donate their blood. Blood donation is one way of saving people in time of need of blood. Many people have fears on donating of blood, primarily reason of it was the fear of the needle but they never thought of just the second of being hurt by it would save lives for many people.
This year's theme "Pledge 25: 10 Years and Counting...One is not enough, Give Blood Regularly!" as the Philippine National Red Cross (PNRC) Local Chapter, through the initiative of the Chapter Youth Council (CYC) Officers of the Red Cross Youth celebrates the 10th year anniversary of their young blood donors club in line the celebration of World Blood Donors Month this month of July.
They again encourage young blood donors in the city to pledge in becoming as voluntary non-remunerated blood donors to donate their blood 3 to 4 times a year starting the age of 18. The highlight of the celebration was held at a local mall last July 20,2008 which was a celebrity volunteer was invited to grace the event. Ms. Dionne Monsanto, a former Pinoy Big Brother housemate led the celebration who invited young men and women to donate their blood. A mass blood donation was happened that collected blood from 111 blood donors from old and new members of Pledge 25.

Pledge 25 is a program of Red Cross Youth Department (RCY) in support of the drive on voluntary, non-remunerated blood donation campaign of the National Blood Service. It is a group of young blood givers motivated to become voluntary blood donors and will pledge to regularly donate blood 3 to 4 times a year starting the age of 18 until they reach 25 years old. Pledge 25 aims to organize a youth group who will work as an arm of the Red Cross that will tap the youth sector as regular donors of the Red Cross and instill into young and season alike the value of saving other's life by voluntary blood donation.

In this city, the Program was started by the CYC offices following the successful launching ceremony in Manila which serves as the national model for other provincial chapters of the Philippine National Red Cross would also replicate the same. With the joint effort of the Red Cross Youth and the Blood Program, it started with mass orientation and dissemination activities in different occasions to various higher learning institutions with Red Cross Youth Organization and to several communities in this city as well. Until on February 08, 1998, the Pledge 25 Program was launched locally with a fifty five (55) initial young blood donors and members coming from the different Red Cross Youth Organization and communities in this city. Subsequently after two (2) months from the launching, a total of 153 young donors were able to donate blood and several of them came back on the third month for their second donation.
Like what happened in the situation of the blood donors in the city and in entire county, this grouped of blood donors in our city experienced a high-low trend as it reached the modern age after a great start on their launching.

Year by year the membership is declining and few of the members are coming back for the follow up donations. Some are already expired due to age qualification (18-25 years old) and they are already part of the Blood Galloner's Club. Mr. Mario Bongayal, President of the CYC locally said again initiated to re-launch the Pledge 25 in a 2005 which they also invited Red Cross Youth Star Volunteer, Ms. Maybelyn dela Cruz was invited to be with us to celebrate the re-launching.

The PNRC believes that young blood donors are ideal among target donors because they comprise majority from the "low-risk" bracket of the population. Youth donors are therefore encouraged to donate blood and adopt a regular blood donation-practice which entails healthy lifestyle to keep them excluded from the so called "individuals-at-risk" and it vision to retain young blood donors to become "safe donors".

The Red Cross Youth continue on motivating people to be a young life-savers, blood donor recruiters to be physically healthy. Mr. Bongayal said that regular blood donation is important and as it speaks volumes about one's values as it saves lives. And co-operaation in honouring their pledge will ensure a steady flow of blood to sustain the life saving work for the community.

According to Red Cross donors should be 18 to 25 years can be a member of PLEDGE 25 but 16 to 17 ears old must present a parents consent with a weigh of at least– 110 lbs, blood Pressure – systolic – between 90 to 160 mmHg and diastolic – 60 to 110 mmHg and hemoglobin – not less 125 gm/ml. Benefits of giving blood are like a give a little gift, giving act of blood donation means saving another person's life. It is a Free Physical Check up and Laboratory Test–Donors will know their blood type, Hemoglobin level, significant results of screening test s done (Malaria, Hepatitis B and C, Syphilis, and HIV) and whether they are anemic or not.
"Change Oil" – When you donate blood, your bone marrow is stimulated to produce new blood cells. This will make your blood –forming organs function more effective and active cells. Some studies have shown that regular blood donation can help prevent build-up of major organs including the heart. This is equivalent to "change oil" in a car. And Blood Donor Card and Pledge 25 ID Card – With the blood donor card, Pledge 25 members are given priority in case of blood needs. And actually the cheapest way of donation is to give blood. One way you can really make a difference to your community without going to great expense is to give blood. So do something good today. You may visit the PNRC's blood center.

Sir Levy, Great for you to have other reporter for your blog. I work with barangay can I do to?

Anyone can contribute to the blog. You can post a comment or email me directly at andrew.levy@us.ibm.com

Thanks for yet another fascinating article! But, I thought it was "Lord Andrew" :)
Many people consider the Phillipines a "third world country"; limited in resources, limited in so many things.
These blog posts tell me this country may have "third world resources". yet, in terms of brains, adaptability and sheer GUTS and determination to get a task done many industrialized "first world" nations could learn a LOT from this country.
What a fantastic idea to promote a healthy lifestyle among young adults; with the side benefit of helping others through the gift of life-blood.
This article is a prime example of "neighbors helping neighbors" in a simple but most effective way.
Terry

Genial brief and this post helped me alot in my college assignement. Thanks you on your information.